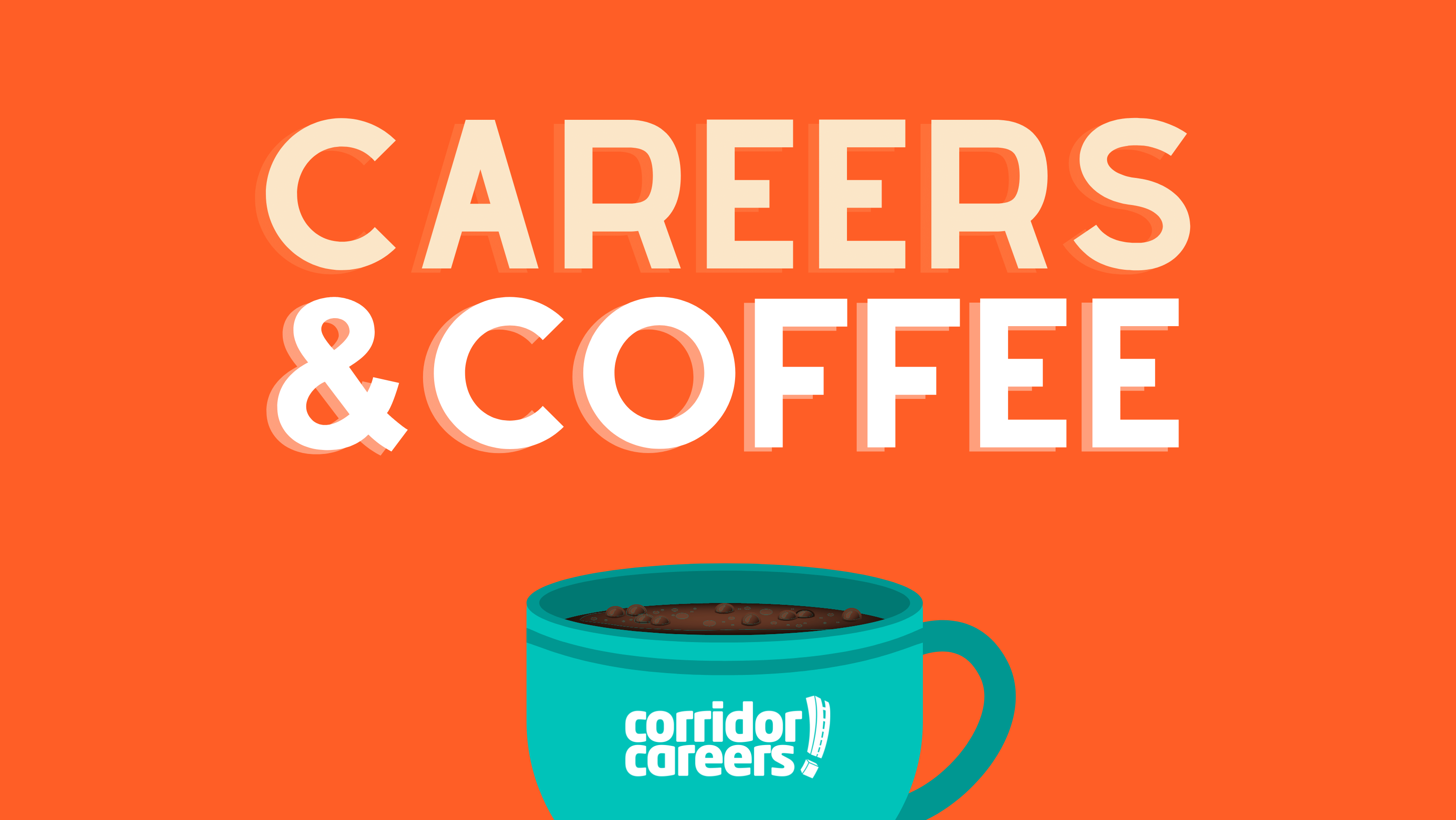 In this episode of Careers & Coffee, Liz and Dan discuss topics such as questions to ask an employer during an interview, when to talk about salary, and what if you don’t have any questions?

Dan Holterhaus 0:05
Number eight. I got some coffee going.

Liz Kennedy 0:08
I have a smoothie. But creason smoothie sounds weird.

Dan Holterhaus 0:17
I’ll be only on coffee during our careers and coffee chat.

Dan Holterhaus 0:25
I’ll keep it on brand for us. Alright, let’s dive right in. Today, we’re going to talk about some interviews, interviewing and in particular, what are good questions to ask a potential employer when you’re getting interviewed? So at the end of an interview, a lot of times, you’ll get asked, Do you have any questions for us? And, Liz, I’d like to know, what kind of questions would you ask a potential employer?

Liz Kennedy 1:02
So, yeah, the end of the interview questions are really good time for you to have your prepared questions that you thought of ahead of time, because at that point, your brain is probably going to be fried as a candidate, because they’ve just peppered you with interview questions, hopefully, you’ve prepared for and had great answers to. So at the end, when you have any questions, if you say, No, I don’t think I have any questions. you’ve answered them all. That’s okay. That’s fine. But, but be honest. Like, if you still aren’t quite sure what the culture of the company is asking just a simple question like, how would you describe the culture of the company or the team that I’m going to be working with? And that gives a chance to the employer to kind of reflect back on what their experiences as an employee at that company? And how, how they would describe the culture? So I don’t know, that would be one culture, ask about culture, you can ask about, you know, what would my day to day job entail? If you haven’t already had that question answered? And that’s a really good set gives you a really good sense of like, okay, when I, if I want to get hired at this job, these are the, these are activities I’d be doing on a day to day basis. Those are ones I would ask.

Dan Holterhaus 2:22
I like both those questions. One, one that I’ve used in the past, that almost catches whoever is interviewing me on their toes is Why did you take this job at this company? And it just gets them to think a little bit. And a lot of times, it does turn into more of like a culture talk, because I feel like that is a driving force behind all why a lot of people take positions. Let’s, let’s switch gears just for a second here and talk about salary negotiations. Because I know we were talking right before this and right at the end of say, an initial interview is not quite the right time to start talking salary. Could you go in

Liz Kennedy 3:04
more detail? Okay, so let’s just say you’ve had a good interview with the potential with your employer or potential employer and you near the end, and you really want to know, okay, well, how much is this position pay? That’s not actually a good time to ask that question. What you really need to determine in that first interview is, is the company a good fit for you? And are you a good fit for that company. And if those two things are clicking, you’re going to have another conversation with that employer, when they make me there make you an offer, or you enter into a salary negotiation. So it could if the employer brings it up, and they want to talk about it, be prepared for that. But for the most part, the initial interview is not the time that you’re gonna talk about salary negotiation, because the employer is considering other candidates most likely for the same position. So what they’re going to be doing is evaluating your answers to their questions and your questions to them, compare them to other candidates, and try to determine who is the best candidate to work here. It’s a big investment to hire someone, you can make bad choices as an employer. And it can be huge, it could have a huge impact on the company. And so while it may have feel like, why didn’t they pick me, or they’re just being so picky, I just don’t have exact skills, but I have close skills. So I should be considered it all those things could go through your head while you’re interviewing. But try to keep the perspective of the employer on your mind to is that they’re making a huge financial investment in hiring someone and it’s going to have an impact on their business. And so if you’re not quite the right fit, they want to make sure that they find someone who is there, things that go into I mean, I’ve had to hire multiple times, and that what goes through my head is like, well, I really I mean, and I like everybody, like, I really like these people and I can see myself working with them. But are they exactly the right fit for our company at this moment, and then for our future, those are the things that I have to consider as a hiring manager. And sometimes you have to make really tough choices, because you may have really great candidates to choose from. And you’re just, you’re just trying to determine who is the best candidate or, you know, who did the team click with and some of the other factors. So there’s just so many factors that are beyond just your individual skill set and personality that that go into determining who gets that role.

Dan Holterhaus 5:33
Yeah, I love that. And it’s something you can’t take personally, right as a dark seeker. Yeah. I’ve described it as kind of like a breakup, right? Yeah. breaking up with a, you know, boyfriend or girlfriend or some something along those lines, where it’s just an uncomfortable feeling.

Liz Kennedy 5:53
Yeah. Well, you’re on this blind date, right? Your first interview, you get your phone screens, like, okay, moved on to the interview. Now. Now we were, you know, I’m a little bit deeper into this relationship. And then they’re just like, Okay, well, we found another candidate, heartbroken. But the way that you can be less heartbroken is think of it as a numbers game. So it’s look at your skill set on your resume. Is it? Does it speak to the skills that they’re looking for? That’s number one, right? And then how many of those positions Did you apply for? Because they’re allowed lot of jobs are kind of an upside down state right now, in Iowa. There are a lot of jobs that don’t have enough candidates. And so it’s really a job seekers market. So make sure you’re applying for and have lots of choices so that you’re kind of in the driver’s seat, you have a little bit more control of like, Okay, well, I’ve, I’ve got interviews with multiple places. One of them’s gonna pick me, most likely.

Dan Holterhaus 6:56
Great advice. I love that. Well, as always, let’s, let’s go ahead and wrap it up. was anything else to add? Otherwise, we’re gonna move on from careers and coffee, and we’ll be doing careers and coffee nine. Next week?

Liz Kennedy 7:12
Yeah, we just just parting thoughts are. Everybody has unique skills, right? And every, every person deserves to find work that is right for them. And so it can be really tough as you go through the interview process and feel like no one, no one sees that about you. So it’s your job as a job seeker to understand. These are my unique skills and what I can bring to the table and just kind of rest, rest and rest on those feelings of I know that I have worked for for some type of job, it may take me a little while to find the one that I’m looking for. That’s really right for me, but in the end, we need you to be working in the job that is right for you. Because that’s where you’re really going to help everyone.

Dan Holterhaus 7:58
You’re in the driver’s seat as a job seeker.

Dan Holterhaus 8:03
Well, thanks a lot, Liz. It’s been a blast. I hope it’s moving pretty well. On the coffee.